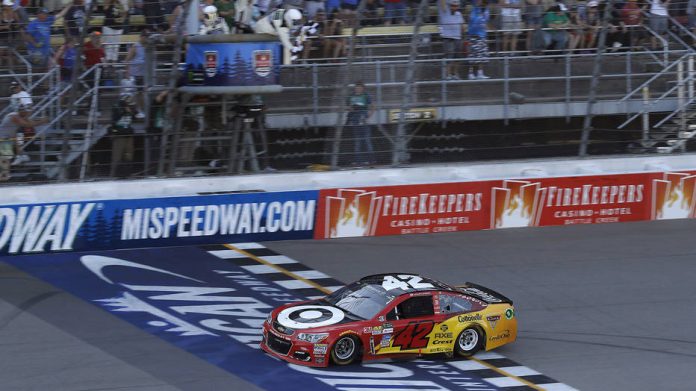 Kyle Larson in the No. 42 Chevrolet pulls off his second victory in the 2017 Monster Energy Cup Series in the Firecracker Casino 400 at Michigan International Speedway.

Larson had some tremendous restarts in Michigan this Sunday to capture his second win in a row dating back to last August.  He appears to have learned a valuable lesson from Jimmie Johnson two weeks ago at Dover who schooled him on a late restart to take over control of the race for the victory.   Larson had the fastest race car at Dover, but was out foxed by Johnson.

However, this Sunday with a very strong push by Ryan Blaney in the bottom lane during a restart on Lap 186 of the 200 lap race, Larson passed Kyle Busch for the lead through the first two corners and remained the leader throughout the rest of the race.  There were two more brief caution flags, but they had no impact on Larson as his restarts were truly exceptional.

Larson passed the finish line and the checkered flag .993 seconds ahead of Chase Elliott who is making a habit of finishing in second place lately on the circuit.

The top finishers behind Larson and Elliott were Joey Logano in the No. 22 Ford in third place, Denny Hamlin in his No. 11 Toyota fourth, and Jamie McMurray in the No. 1 Chevrolet in fifth place.  The remaining top 10 drivers were Truex, Kyle Busch, Ricky Stenhouse Jr., Dale Earnhardt Jr., and Jimmie Johnson.  Danica Patrick had a good run and was positioned to finish in the top 15 until the No. 19 car smacked into the No. 10 spinning the race car into a concrete wall.  The wreck ended her racing for the day.

Also of note Jimmie Johnson started in the rear of the field when he had to use the backup vehicle after he wrecked in a practice run.  Kevin Harvick and Kurt Busch were also sent to the rear for the start of the race because of unapproved body modifications prior to the contest.  Busch finished 12th and Harvick 14th with respectable finishes.

Meanwhile, Martin Truex Jr. won both the first and second 60 lap stages and banked more playoff points to a series leading 20, however, Larson regained the lead in the standings by five points over Truex 640 to 635 by winning the race.

The Monster Energy Series moves to Sonoma Raceway for the running of the Toyota/Save Mart 350 starting next Sunday 6/25 at 3:30 pm eastern.  Mint Hill and Charlotte area race fans can follow all the action on FS1 or PRN.