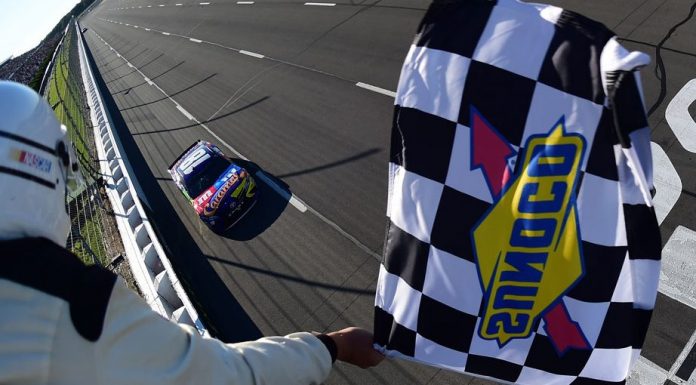 Kyle Busch with the win at Pocono Raceway has compiled at least one win on every NASCAR track in his career with one exception.  Only the Charlotte Motor Speedway still eludes him in the No. 18 Toyota.  He collected his 39th NASCAR career victory when he crossed the finish line on Sunday.

Busch benefitted from an absolutely strategic pit call by crew chief Adam Stevens, he then powered through the field charging hard after his final pit stop to pull away from the front runners to beat second place finisher Kevin Harvick by 6.178 seconds when he passed the checkered flag.  The win broke a career long 36 race winless drought giving Busch some needed momentum going into next weeks race.

Harvick stopped in pit road for the final time on Lap 124, Martin Truex, Jr. the driver standings leader pitted two laps later, this left Busch on the track to lead 10 of his race-high 63 laps in the clear without any real pressure.  Busch finally pitted in Lap 135, he put on fresh tires giving the No. 18 Toyota an advantage, he then caught and passed teammate Denny Hamlin and Truex.

Busch caught Harvick in the No. 4 Ford in Turn 3 on Lap 144 of 160, when Harvick got loose and slowed in the corner, Busch accidentally tapped the rear bumper of the Ford, maneuvered around and powered past Harvick leaving him in the dust.

Busch collected the Stage 1 victory as well which is his eighth stage win of the season.  The victory also gave him five additional playoff points making Sunday a very good day for the No. 18 Toyota.

Clint Bowyer obtained his first stage win of the season in Stage 2 at Pocono, however, he finished sixth on the day behind Keselowski.

Next weekend NASCAR moves the Monster Energy Cup Series to Watkins Glen International for the running of the “I love NY 355” starting on Sunday, August 6th at 3:00 pm.  All the racing action can be followed on NBCSN television, MRN radio and Streaming on NBC Sports.