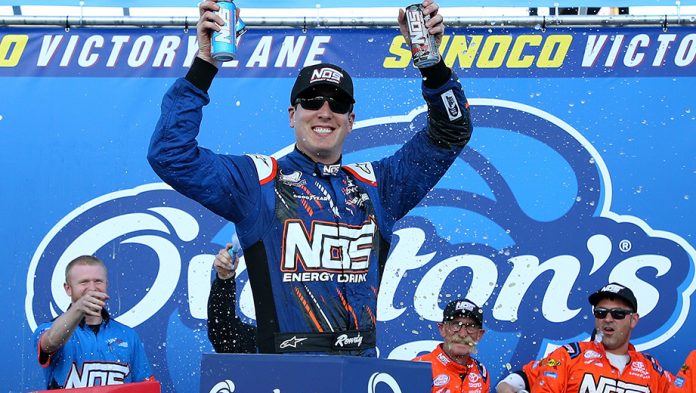 Kyle Busch drove to the winners circle for the third time this season with another XFINITY Series victory under his belt at New Hampshire Motor Speedway.  While second place finisher Ryan Preece in his No. 20 Toyota made a huge impression in Saturday’s Overton’s 200 NASCAR XFINITY race.  His second place finish opened some eyes yesterday, owner Joe Gibbs was impressed with Ryan’s performance and his team finishing in the top two spots.  Preece is scheduled to race again in Iowa on July 29th.

Brad Keselowski who arguably had the fastest car in the race had a setback on pit road that erased a potential win for the No. 22 Ford on a stop and go penalty.  Busch then sailed to a 10.425 second win, his sixth at New Hampshire Speedway and 89th of his career, extending his series record.

The fast paced race ran with a yellow caution flag from a restart on Lap 97 to the finish line in lap 200.  Busch made a pit stop on Lap 169 for fuel and fresh tires.  Keselowski led a race high 102 laps drove his car into pit road on Lap 170, however, disaster occurred when his jack dropped and he accelerated, the gas can was still attached to the coupler, his forward motion pulled the equipment out of the No. 22 pit stall giving the team a stop and go penalty for dragging equipment outside the pit box.  The snafu cost the team a potential victory on Saturday as Keselowski finished fifth, 18 seconds behind Busch who pulled off his third XFINITY win of the year.

The XFINITY Series continues next weekend as NASCAR travels to Indianapolis Motor Speedway for the Lilly Diabetes 250 on Saturday July 22nd at 3:30 eastern.  All the action can be seen on NBCSN and streaming on NBC Sports.