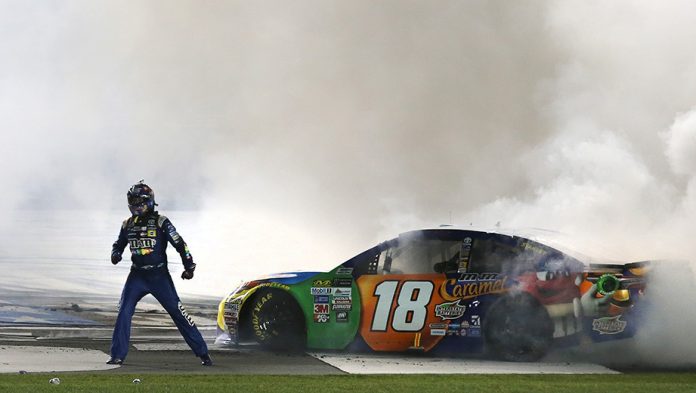 Kyle Busch who is on a tare pulled off a hat trick by sweeping all three NASCAR racing events at Bristol this past weekend.

Busch powered his way past the field and Rookie Erik Jones for the sweep on Saturday night to achieve his second Monster Energy NASCAR Cup Series victory of the season.

This weekend was a race car drivers dream to win all three races including the main event.  Busch led 156 of 500 laps in the Joe Gibbs Racing No.18 Toyota to outlast his competitors in the Bass Pro Shops NRA Night Race.  He continued his dominance at Bristol by gaining his sixth Cup win on the .533 mile track while achieving his 40th career victory in NASCAR racings top division.

Busch was not without tough competition all night from Erik Jones who led 250 laps in the Furniture Row Racing No.77 Toyota, however, he fell short of achieving his first career major victory by 1.422 seconds behind the winner for second place.  Jones put up a good fight and just came up a little short against a race driver who has mastered Bristol.

Meanwhile, Denny Hamlin charged to third place in the No.11 Toyota, Matt Kenseth in the No. 20 Toyota finished fourth and Kurt Busch in the No.41 Ford fifth.  The other top 10 finishers were Ryan Newman sixth, Trevor Bayne, Kevin Harvick, Kyle Larson and Ryan Blaney.

Martin Truex Jr. the Monster Energy NASCAR Cup Series points leader finished 21st, he missed out on an opportunity to clinch his regular season championship.  The “Jersey Boy” had to make an unscheduled pit stop on Lap 207 when he experienced a loose wheel on his race car, he then compounded his misfortune when he received a penalty from NASCAR for speeding during the same pit-road encounter.

The NASCAR Cup Series will continue on Sunday September 3rd for the Bojangles’ Southern 500 at Darlington Raceway starting at 6:00 PM.  Race fans can follow all the action on NBCSN, MRN radio and Streaming on NBC Sports.