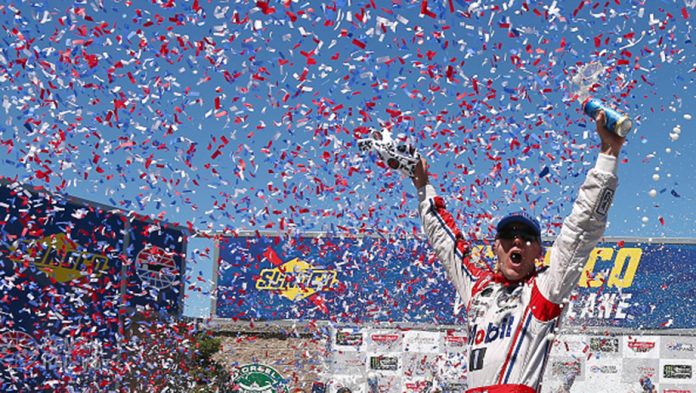 Kevin Harvick won Sunday’s Monster Energy Cup Series running of the Toyota/Save Mart 350 in fine fashion winning his first race of the season, the first at Sonoma and for the first time in a Ford after Stewart-Haas Racing switched from Chevrolet.

This was Harvick’s 36th victory of his career and he passed the checkered flag under a caution after Kasey Kahne in his Chevrolet slammed into a concrete barrier near the start/finish line.  However, by then Harvick already had maintained and established a comfortable lead which was almost nine seconds when he approached the finish line with fuel to spare.

It was a great day for Harvick and the team especially after Martin Truex Jr., who lead for 25 laps left the race when he dropped a cylinder putting him in 37th place.  Truex won stage one and was running well until he developed a mechanical problem.  He handed the series over to Kyle Larson who started in the pole position but faded when he had a few encounters with the asphalt which moved him back to a 26th place finish.  Jimmie Johnson was the winner of the second stage.

Sonoma is a short run track and the speeds we are accustom to viewing on long run tracks simply cannot be accomplished.  Therefore, a little more strategy must go into the planning phase prior to the race.  Starting from the Lap 55 restart after the second stage the race went green and the rest of the field played into the hands of Harvick and crew chief Rodney Childers who held the edge they had achieved to bring home the victory for the Stewart-Haas Racing team.

Next Week the Monster Energy NASCAR Cup Series travels to the Daytona International Speedway for the Coke Zero 400 Powered by Coca-Cola on Saturday July 1st at 7:30 pm eastern.  The local area race fans can view and hear all the racing action on NBC, MRN, and streaming on NBC Sports.