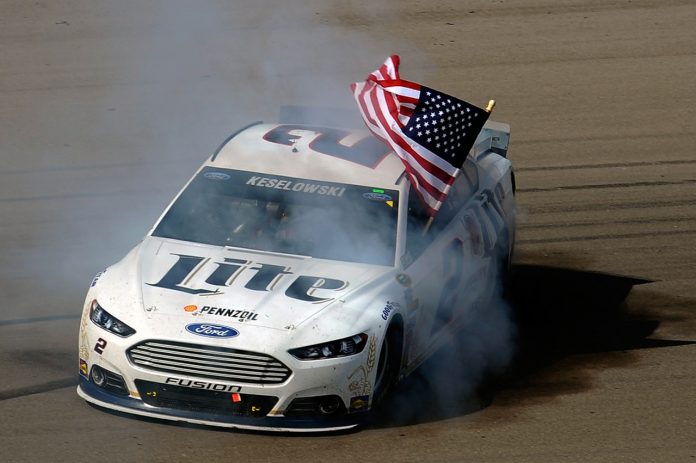 Brad Keselowski wins the Pocono Green 250 in dramatic fashion with a last lap pass ending a 46 race drought for the No. 22 Team Penske Ford.  Keselowski swept through the stages in the 100 lap race, however, he could not pass Kyle Larson until he reached the Long Pond straightaway and right before the Tunnel Turn he flew past Larson and held on to claim his 35th career victory.

This win did not come easy for Keselowski.  A restart with 16 laps remaining left him in the leaders pack after a caution flag for Brandon Jones blown left rear tire and a wreck on Lap 78.  However,  Keseloswki was able to remain on the inside of the front row were he took the green flag next to the current race leader Cole Custer.

A big push from Elliott Sadler moved Keselowski to the front position, however, Sadler continued to shove into Turn 1.  Keselowski went high barely wrecking and keeping the No. 22 Mustang from hitting the wall.  At this point Keselowski continued his aggressive driving and began to maneuver his way through the field with utter abandon.  He then split between the two cars of Brendan Gaughan and Kyle Benjamin while bouncing off both vehicles in the process.

Now entering Lap 97 he had passed Justin Allgaier when the No. 7 slipped moderately, then Keselowski continued his charge in pursuit of Larson.  He eventually passed Larson on Turn 1 to win the event in spectacular fashion.

Keselowski is a very accomplished driver and this past Saturday was his day to get back into the winners circle once again.  The top five finishers behind Keselowski were Justin Allgaier in his No. 7 Chevrolet just .615 seconds behind the winner, Kyle Larson finished in third in the No. 42 Chevy, Elliot Sadler placed fourth in the No.1 Chevy, and Daniel Suarez driving the No. 18 Toyota in fifth position rounding off the top five.

Next weekend the NASCAR XFINITY Series moves to Michigan International Speedway on Saturday June 17th starting at 1:30 pm eastern time.  All the fast paced NASCAR action can be followed on FS1 and MRN radio.