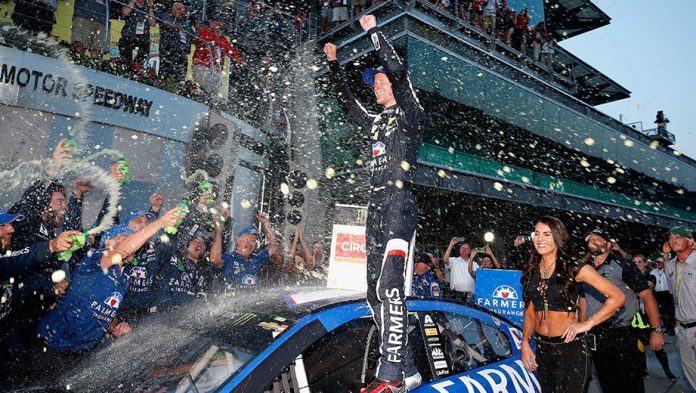 Kahne who had an absolutely great restart in overtime held on through three major wrecks in the final 50 laps to accomplish his first win since 2014 over a long drought totalling 102 winless races.  He was able to cross the finish line ahead of Brad Keselowski who finished second just before the yellow caution flag started waving when Denny Hamlin’s No. 11 Toyota went spinning behind him hitting the wall.

The first wreck occurred when Clint Bowyer in the No. 14 Ford slammed hard into the inside wall and spun multiple times, impacting Kurt Busch, Erik Jones and Jamie McMurray in the melee.

In Lap 75 Trevor Bayne and Dale Earnhardt Jr. got tangled up ending the day of racing for Earnhardt.  The No.88 Chevrolet suffered severe radiator damage when he rear-ended Bayne whose car began to smoke but was able to continue.

In Lap 110 leaders Kyle Busch and Martin Truex Jr. wrecked on a restart that crumpled Busch’s No. 18 Toyota and turned Truex’s No. 78 to burst into flames in a dramatic crash as both cars slammed into the wall opening the door for Kahne’s first victory.

In a restart in Lap 162 there was another pile up when Trevor Bayne’s No. 6 Ford spun around in traffic and collided with multiple cars behind him bringing out another caution flag in the race.

Busch won both Stage 1 and Stage 2 to increase his season total to 7 stage victories.  He also led a race high 87 laps in probably the fastest race car in the field as he was the pole sitter.

Behind the winner Kahne in the No. 5 Chevrolet and second place finisher Keselowski’s No. 2 Ford, the race results has Ryan Newman third in the No. 31 Chevrolet, Joey Logano in his No. 22 Ford fourth and Matt Kenseth in the No. 20 Toyota fifth.  Rounding off the top ten are Kevin Harvick sixth, Daniel Suarez seventh, Matt DiBenedetto in eight place, Chris Buescher ninth and AJ Allemendinger tenth.  Danica Patrick finished eleventh in the No. 10 Ford which should be noticed as she completed all 167 laps running.

Kasey Kahne took full advantage of his long awaited opportunity to get back to the winner’s circle and raced like he wanted to win today with a fabulous restart in overtime sealing the well deserved victory.

The Monster Energy Series will head next to Pocono Raceway for the running of the Overton’s 400 on Sunday July 30th at 3:00 pm eastern.  Fans can follow all the racing action on NBCSN, MRN and streaming on NBC Sports.