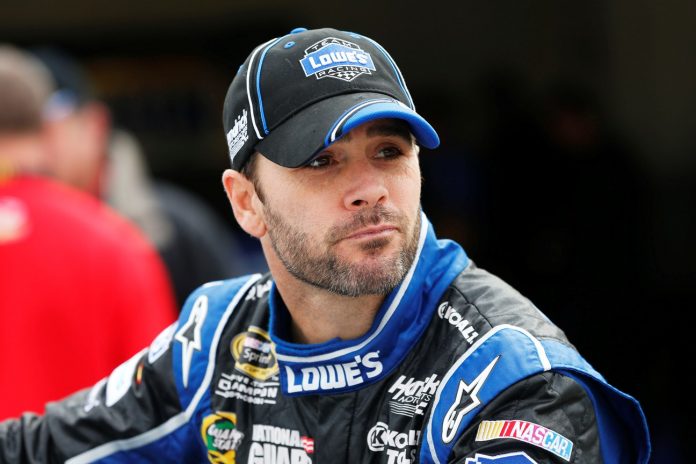 Jimmie Johnson in spectacular fashion on an overtime restart wins his third Monster Energy Cup Series victory of the season at Dover International Speedway.  The win ties him with NASCAR Hall of Fame great Cale Yarborough on the all-time win list with 83 career victories.

Johnson who only led twice throughout the race totaling seven laps in his Hendricks Motorsports No. 48 Chevrolet accomplished his 11th win on the 1-mile track when he took the checkered flag under caution as a multicar pile up ended the day of racing in overtime.  Johnson powered past Kyle Larson in his No. 42 Chevrolet to achieve the historic tie making win.  Larson the winner in Saturday’s XFINITY race almost pulled off a double victory on the same track.

Johnson is arguably the best race driver of all-time on the NASCAR circuit.  He started from the back of the pack as the Hendricks Motorsports team made a decision to perform an unapproved pre-race gear change on the No. 48 race car, however, his persistence and consistency paid off as he rallied to lead in the later stage of the race to bring home the victory.

Larson who had one of the fastest race cars led six times for a race high of 241 laps, but was overpowered by Johnson in the overtime to finish in second place.  When David Ragan crashed with four laps remaining in regulation it erased Larson’s late lead.  The field then bunched up which eventually extended the race six laps beyond its schedule 400 laps giving Johnson his opportunity on a fabulous restart.  Larson did achieve his fifth second place finish of the 2017 NASCAR race circuit in 13 starts this season.

Meanwhile, the “Jersey Boy” Martin Truex Jr. led three times for 102 laps, however, was negatively impacted after a caution flag in Lap 343.  The series overall points leader rallied to finish third in the Furniture Row Racing No. 78 Toyota.  While Ryan Newman in his No. 31 and Chase Elliott’s No. 24 rounded off the top five.  A note of interest for you Danica Patrick fans, she finished in the top ten for the first time this season in 10th place.

Truex added to his points lead by winning the first and second stages, increasing his season total of stage wins to eight which is most in the series through the first 13 races to date.

Next week NASCAR moves to Pocono Raceway with the Monster Energy Cup Series race running on Sunday June 11th starting at 3:00 pm eastern.  All the action can be followed by racing fans on FS1 or MRN.