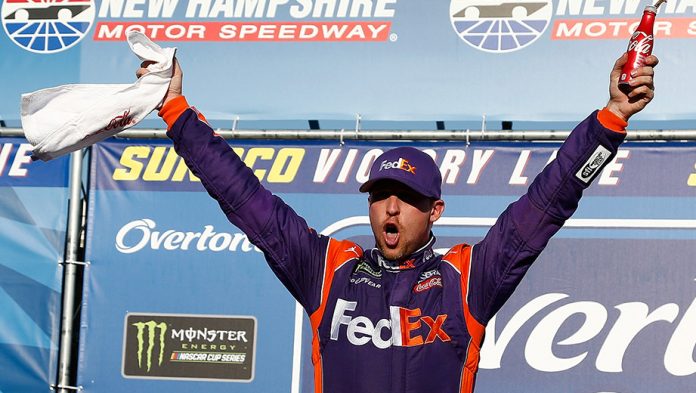 Hamlin led 54 laps of the 301 in the No.11 Toyota, crossing the finish line and taking the checkered flag at New Hampshire Motor Speedway just .509 seconds ahead of a fast closing Kyle Larson early Sunday evening.  This is Hamlin’s third career win at the 1.058 mile track and the 30th of his career in NASCAR’s Cup Series, the Overton’s 301 win marks the first victory of the season for Joe Gibbs racing in the Monster Energy Cup Series.

Hamlin who has been racing well prior to the victory did snap a 28 race-winless streak dating back to last September at Richmond Raceway.  He was still able to accomplish this feat with his back-up car after he wrecked his No. 11 primary vehicle during Friday nights practice run.

The win clinches a playoff berth in the postseason for the team.  Hamlin is now the 12th driver to win regular season races, with 11 playoff spots locked up due to Joey Logano the Richmond winner having experienced a technical infraction after the race.

Kyle Larson who started in the last position in the 39 car field did some terrific driving to finish in second place a half second behind the winner after an infraction for an unapproved part was located on his No. 42 Chevrolet, removing an apparent pole-winning position.  Martin Truex Jr. had the lead for 137 laps, however, he finished in third place when he experienced a right front tire flat forcing him to pit in lap 219.  Matt Kenseth finished fourth in the No. 20 Toyota and Kevin Harvick in the No. 4 Ford finished fifth.

Martin Truex Jr. was the Stage 1 winner leading all 75 laps.  This was his 14th stage victory of the season adding a playoff point to raise his series lead total to 29.   He has won a stage in six of the last 8 previous races.

Kyle Busch won Stage 2 his fifth stage win of the season.  He finished 4.138 seconds ahead of second place finisher Denny Hamlin and carried momentum over into the final stage to bring home his first Monster Energy Cup Series victory this year.

NASCAR’s Monster Energy Cup Series continues next week at Indianapolis Motor  Speedway for the Brickyard 400 starting on Sunday July 23rd at 2:30 eastern.  All the action can be followed on NBCSN, MRN radio and streaming on NBC Sports.