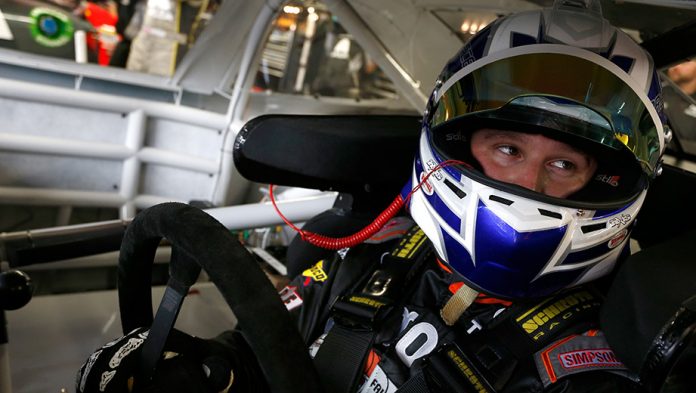 Ryan Preece won his first career victory on Saturday at Iowa Speedway when he held off a hard charging Kyle Benjamin in the No. 18 Toyota by a mere .054 seconds.

The U.S. Cellular 250 at Iowa Speedway had three restarts in the race’s final 17 laps setting up Preece in the No. 20 Toyota for the win.  In the final restart, Preece jumped out ahead on a solid run and never surrendered his position to Benjamin who was chasing his tail until they finally crossed the finish line with the waving checkered flag showing Preece was the clear winner.

Benjamin who ran a great race as well finished second.  It was his career best performance to date.  Veteran Brian Scott took third place in his first start of the season.

The winner earned his first career Coors Light Pole Award early on Saturday when he powered to a lap of 24.072 seconds at a top speed of 131.857 mph.  Preece and his race car carried over his dominance by winning Stage 1 which he led every lap.

Preece came in second in Stage 2 won by Justin Allgaier who barely held off the No. 20 Toyota driven by Preece to earn an all important playoff point.

When Spencer Gallagher hit the wall with 80 laps remaining it was decision time for many of the drivers and teams.  All the top contenders elected to enter pit road with the exception of Allgaier which came back to bite him in the long haul.  He quickly dropped from first to seventh, then to 15th, he finally took a pit stop with 25 laps remaining basically out of contention.

The XFINITY points leader Elliott Sadler was up in the lead pack most of the race but ended up in 12th place.  Sadler still maintains a 54 point lead over William Byron, who crossed the finish line in ninth place.

Preece was on a mission and wanted to make a statement.  He clearly was not racing for points, he was driving hard pushing his vehicle to the maximum for the victory.

The rest of field had Benjamin Poole in the No. 48 Chevrolet in fourth, Cole Custer in the No. 00 Ford in fifth place.

Next week the XFINITY Series Cup will continue at Watkins Glen International for the Zippo 200 on Saturday, August 5th starting at 2:00 pm eastern.  All the racing action can be followed on NBCSN, MRN, Streaming NBC Sports.