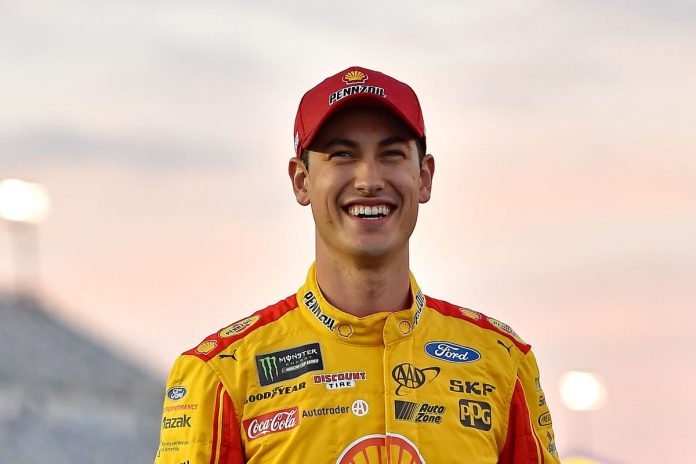 It basically took Joey Logano the entire race from starting way back in the field to propel to the front in Sunday’s Toyota Owners 400 in Richmond.

Logano started in the back of the pack after a post-qualifying transmission changeover.  However, when the checkered flag was waved on Lap 400 he crossed the finish line first ahead of Brad Keselowski in his Number 2 Team Penske race car by only three lengths.  Keselowski had the faster racing car, however, he ran out of time and if he had 3-4 more laps he had a great opportunity to pass his teammate.  Keselowski led for 110 laps, but had a difficult time navigating traffic after the final restart.

Meanwhile, Logano showed true grit in his Number 22 Team Penske Ford after starting behind six cars who stayed out on the track on old tires under Ryan Blaney’s contact with the wall on Turn 3 during Lap 377.  On new tires, Logano wasted no time in passing the cars in front of him and passed series leader Kyle Larson for the top position with only 16 laps remaining.  He took the lead on Lap 384 for the first time during the race and never looked back.

This is Logano’s 18th career win in 300 starts in the Monster Energy NASCAR Cup Series.  It was his first victory of the 2017 season and second career win at Richmond International Raceway.

On Lap 377 after NASCAR called the final yellow flag, Logano was the first driver off after the pit crew had an outstanding pit stop and he lined up behind the six cars that stayed out, they were Larson, Stenhouse Jr., Buescher, Truex Jr., Ragan and Whitt.  Busch drew a penalty for a line violation and moved to the back of the field, which virtually eliminated him from contention.

The other top finishers were Denny Hamlin in third in his No. 11 Joe Gibbs Racing Toyota, Ricky Stenhouse Jr. finished fourth on his old tires, while Kevin Harvick crossed the finish line fifth.

The only major incident of the race occurred late when teammates Dale Earnhardt Jr. and Jimmie Johnson ran into each other which inflicted damage to Junior’s Number 88.  Johnson finished just outside the top ten in 11th place, while Earnhardt placed 30th.

The Monster Energy Series continues next weekend at NASCAR’s largest racing track for the GEICO 500 at Talladega Superspeedway on Sunday May 7th at 2:00 pm eastern on FOX Television and MRN Radio.  Brad Keselowski is the 2016 defending winner.