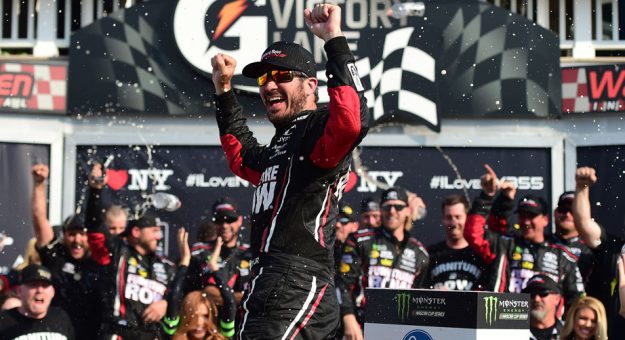 Truex in the Furniture Row Racing No. 78 Toyota led 24 of 90 laps which was a race high for the New Jersey native.  At the finish line with a sprint to the checkered flag with Matt Kenseth in the No. 20 Toyota, Truex was able to hold him off with a .414 second victory.  This was Truex first win at Watkins Glen and 11th career victory as a Monster Energy Series race driver.

The No. 78 took the lead in the 88th lap for good, as his competitors enter into pit road to refuel their cars.  Truex stayed on the track and expertly managed his fuel consumption to get him across the finish line into the winners circle.

After winning his ninth stage race of the season Kyle Busch had to make an extra stop in pit road which proved to be very costly.  He had a lug nut wedged between the brake caliper and wheel on his left front tire, which moved him back to 32nd place, however, he surged past other drivers with an extremely fast race car to get into the top 10 by the end of the second stage and eventually attain a respectable seventh place finish.

Coming up next weekend the Monster Energy Cup Series will move to the Michigan International Speedway for the Pure Michigan 400 running on Sunday August 13th to begin at 3:00 PM eastern.  NASCAR race fans can follow all the exciting action on NBCSN, MRN, or Streaming on NBC Sports.