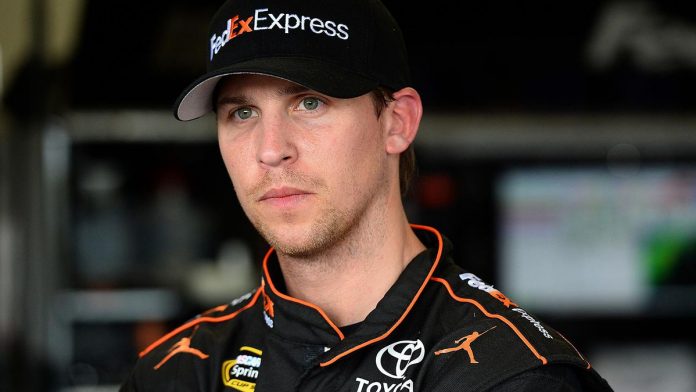 The rookie drove a great race and really tested Hamlin.  The two drivers crossed the finish line with Hamlin going low and getting the checkered flag in a photo finish.  Hamlin crossed with the front nose of his vehicle ahead of Byron in the tightest race of the season just .012 seconds ahead of the second place finisher in the No. 9 JR Motorsports Chevrolet.

The veteran Hamlin took the rookie to school side drafting off the final corner, and won what looked more like a drag race for his first NASCAR XFINITY Series race of the year in his No. 20 Joe Gibbs Racing Toyota.

For Hamlin this victory was his first in the series in his fourth start since winning at Charlotte in May 2015.  This win was Hamlin’s second at Michigan and 16th of his career.

In Lap 117 after a restart Hamlin pushed Byron to the lead going past Brad Keselowski.  Byron began to pull away from the pack until a caution flag was waved for Matt Tifft’s No. 19 Toyota taking a spin into the infield grass on Lap 120 which brought out the seventh and final yellow flag of the day.

After the restart Byron pulled ahead on Lap 124 with Hamlin in close pursuit hanging with him on every turn and straightaway.  However, Hamlin using his experience after battling for two laps was able to get Byron’s race car loose through the final two corners to position himself for the low passing maneuver bringing home the victory.

The top five finishers behind Hamlin and Byron were Elliott Sadler in his No. 1 Chevrolet was third, Brad Keselowski in the No. 22 Ford fourth, and Kyle Busch in the No. 18 Toyota fifth.  Ty Dillon, Paul Menard, Ryan Reed, Brandon Jones, and Cole Custer round off the top ten.

The next XFINITY race will be at the Iowa Speedway on Saturday night at 8:30 pm eastern for the American Ethanol E15 250 presented by Enogen.  Race fans can follow all the action on FS1 or MRN radio.