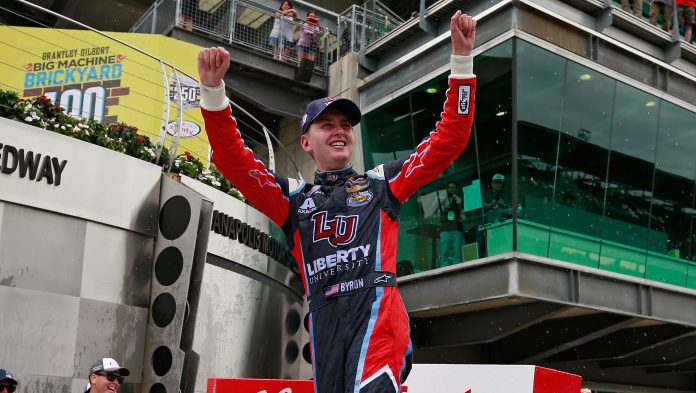 William Byron the leader in the NASCAR XFINITY Series Sunoco Rookie of the Year standings, continues his dominance with the race drivers third victory of the season.  He crossed the checkered flag at the finish line just .108 seconds ahead of Paul Menard who was in hot pursuit.

In the final lap Byron in the No. 9 Chevrolet performed excellent blocking maneuvers to keep Menard at bay who was never more than one car length behind.  In fact Menard was practically on Byron’s bumper, he tried one final push at the end when powering past a lapped vehicle first passing low and then going high.  Byron just cut him off at every turn crossing the finish line as the winner of the Lilly Diabetes 250.

Byron made his decisive pass for the lead in lap 85 of 100, as he surged past JR Motor Sports teammate Elliott Sadler.  Menard picked up two spots, from fourth to second over a six-circuit stretch between laps 90-96.  However, he could not overtake Byron who blocked each of Menard’s attempts to make a winning pass for the victory.

Joey Logano in the No. 22 Ford followed Byron past Sadler finishing in third place, after losing the second spot to Menard on lap 96 who powered by him in the No. 2 Chevrolet.

Kyle Busch lead the race six times for a race high 44 laps, but he dropped from contention when he made a pit stop with less than 20 laps remaining in the race.  The timing of the pit stop strategy backfired and he ended up in 12th place.

The top 10 remaining finishers include Elliott Sadler in the No. 1 Chevrolet fourth, Cole Custer in his No. 00 fifth, Ryan Reed’s No. 16 Ford sixth, Brennan Poole seventh, Daniel Hemric in the eight spot, Brandon Jones ninth and Ty Dillon tenth.

Next Week NASCAR XFINITY Series racing will travel to Iowa Speedway for the running of the US Cellular 250 presented by American Ethanol on Saturday July 29th at 3:30 pm eastern on NBC television and MRN radio.