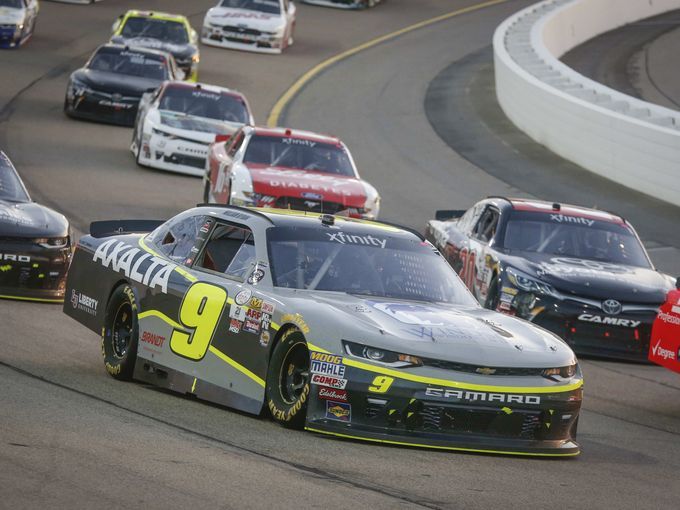 The final restart with ten laps remaining followed a previous restart which Byron and his team made the decision to pit his racing car to take on more fuel and add new tires while he pitted paid off handsomely at the end of the race.

Lady luck remained with Byron as he was never seriously challenged again down the stretch, however, he only had four or five laps of fuel left in the tank before his last pit stop helped set the stage for his first win.

The ninth and final yellow caution flag of the race also benefitted some other drivers who finished in the top ten including Ryan Sieg, and Tyler Reddick.  For Sieg his second place finish behind Byron was his fourth career top five finish.

The top five finishers behind Byron and Sieg in their Chevrolets was Reddick in third place driving a Chevy, Ross Chastain fourth in a Chevy, and Dakota Armstrong in his Toyota finished in fifth position.

Christopher Bell who started in the pole position was very consistent and remained in position the entire first stage, he had an early challenge from teammate Kyle Benjamin, and fended off a late charge by Sam Hornish, Jr., making his first start in a nine month layoff.  Hornish last years winner who lead 183 laps to win in 2016 raced extremely well as no rust showed, but misfortune struck 19 laps into stage two when Bell made contact with his rear fender sending Hornish into the wall ending his night of racing.

The next XFINITY Series race will take place on Friday June 30th at 7:30 pm eastern at the Daytona Firecracker 250 Powered by Coca-Cola.  NASCAR XFINITY race fans can follow all the action on NBC-SN and MRN radio.