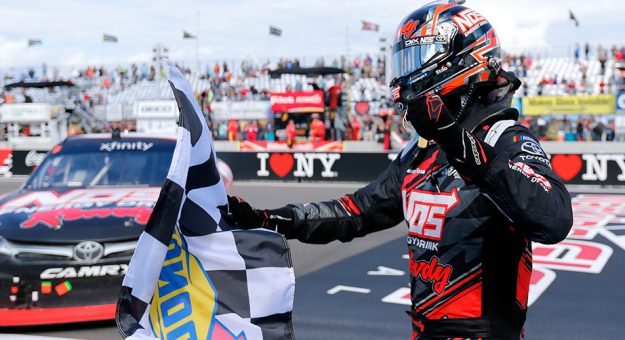 Kyle Busch adds another win in XFINITY competition achieving his fourth victory of the season including his 90th career win on Saturday.

This was his first career win at Watkins Glen so Busch continues to check off items on his bucket list of achievements.  He did not obtain this win without some challenges he had to overcome during the race.  In Lap 17 of 82 he had to recover from a wheel-hop and spin on Turn 1, along with a penalty issued by NASCAR for driving through too many pit boxes.

Busch had to beat Joey Logano in the No.12 Ford who held the pole position.  Logano finished second with a sprint to the checkered flag 1.049 seconds behind the No. 18 Toyota driven by Busch.

Kyle grabbed the lead when both Brad Keselowski and Logano entered pit road on Lap 49 of the race.  Busch was able to take advantage by staying on the race track for an additional five laps.  This is the same strategy his team used last week to gain the victory at Pocono.   By the time he pulled out of pit road on lap 55, he was 1.2 seconds ahead of Keselowski and 10 plus seconds in front of Logano, who had a longer than expected pit stop due to a lug nut problem with a tire.

The strategy of staying out on the track as long as possible before entering pit road has really worked well for Busch as he was able to cycle back up to regain the lead.  This strategy has produced two consecutive wins for the team.

He was able to remain the leader for the last 27 laps, including surviving a restart with three laps to go after Casey Mears ran out of fuel and stopped on the track forcing the fifth and final yellow flag of the day.  During the restart Busch selected the inside lane to maintain control of the preferred line into Turn 1 and the rest is now history.

The XFINITY Series will continue next week at the Mid-Ohio Challenge on Saturday August 12th starting 3:30 PM.  Follow the action on NBCSN, MRN or Streaming on NBC Sports.