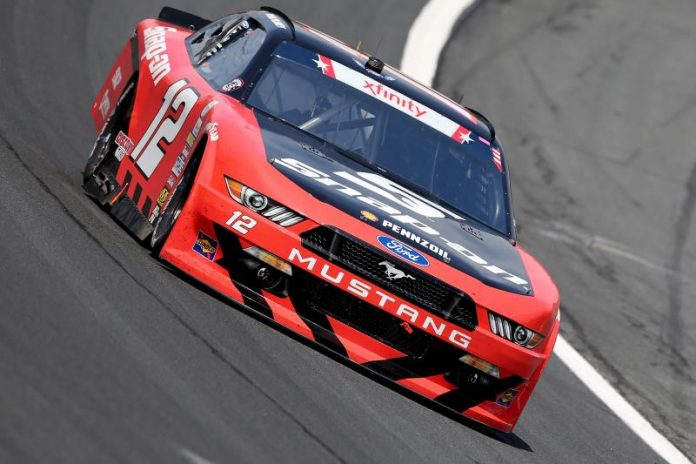 Ryan Blaney powered past Kevin Harvick in the final laps to pull off the victory in Saturday’s Hisense 4K TV 300.  Blaney surged past Harvick for the lead after a restart on Lap 198 of 200 in his No. 12 Team Penske Ford.  He crossed the finish line .244 seconds ahead of the 2nd place finisher driving in the No. 41 Stewart Haas Racing Ford.

The race became real interesting when Blaney maneuvered his racing car into second place after the 11th caution of the race.  Harvick who was leading at the time had to make a decision when the caution flag flew for the final time due to Darrell Wallace Jr.’s spin in Turn 2 on Lap 194 of 200.  Harvick chose the outside lane for the final restart instead of going on the inside lane, this would have forced second place Blaney to line up in front of Team Penske teammate Brad Keselowski, which would have set up a possibility of Keselowski pushing or tapping Blaney forcing him to adjust and giving Keselowski’s teammate Kevin Harvick a better chance to extend his lead.

With Harvick selecting the outside lane he could not clear Blaney through the first two corners after the final restart with three laps remaining.  By this time Blaney had taken the lead when he exited Turn 4.  Blaney never looked back as he had clearly ruled the day with his last strategic maneuver.

Blaney picked up his first win of the season, the first time at Charlotte and the fifth victory of his career.  Blaney did lead 107 laps to Harvick’s 58 throughout the race, and he was outstanding all day on his restarts.

With Harvick finishing second, Austin Dillon was third, Christopher Bell fourth, Denny Hamlin fifth and Brad Keselowski sixth.  Ryan Reed who drove his No. 16 Roush Fenway Racing orange camouflage car for veterans finished eleventh in the large field of cars and drivers.  Alan Burgess a Mint Hill veteran whose name was sketched on the passenger side of Reed’s racing vehicle had one wild ride.  This was especially evident when Reed tapped Christopher Bell who finished fourth sideways through the infield grass, however, he avoided any major damage to the undercarriage.  Meanwhile, Reed and Burgess continued the race and had a good showing finishing one spot beyond the top ten.