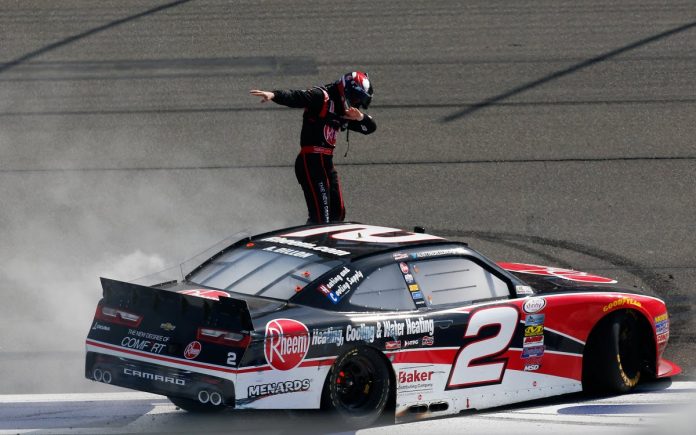 Austin Dillon achieves his first career Monster Energy Series victory at the Coca-Cola 600 in the early morning hours of Memorial Day.  This win was Dillon’s biggest victory of his career under a new crew chief and just enough fuel to get him to the end of the 600 mile grueling 4 Stage race.

Dillon and the crew chief made the strategic and risky decision to remain on the track with eight other drivers while second place finisher Kyle Busch and third place driver Martin Truex Jr. came into pit road for a pit stop on lap 368 of 400.

Meanwhile, Jimmie Johnson also stayed on the track gambling he would have enough fuel to finish the race.  He dropped out with less than three laps remaining running out of gas.  Dillon strategically trailed Johnson to save fuel and took advantage of the opportunity.  This left Kyle Busch and the Jersey Boy Martin Truex Jr. in hot pursuit, however, they could not catch Dillon who crossed the finish line first.

The No. 3 Chevrolet from Richard Childress returned to victory lane for the first time since the late Dale Earnhardt won in Talladega in October 2000.  Childress is the grandfather of Austin Dillon who retired the No. 3 in 2001 at the Daytona 500 in honor of Earnhardt.  When his grandson ran the first full season of the Monster Energy Series Cup in 2014 Childress took the No.3 out of retirement.

Dillon led only the last two final laps of the race and was patient enough not to push the racing car too hard to catch Jimmie Johnson.  The bold move turned out to be brilliant and it paid off giving the driver and the Childress team the victory.

There were three cautions throughout the race.  However, the biggest impact delay happened when the heavy rains came with lightning for a 1 hour and 40 minutes pushing the end of the race into the early morning hours.

Next week the NASCAR Monster Energy Cup Series moves to Dover International Speedway for the AAA 400 Drive for Autism.  The race will begin on Sunday June 4th at 1:00 pm.  NASCAR fans can follow all the action on FSI and MRN.