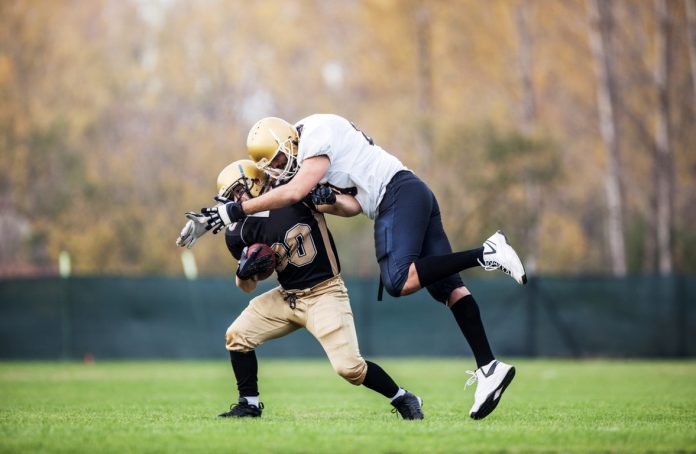 As Luke Kuechly’s surprise retirement from the Carolina Panthers reverberates through fan circles and the NFL, the health dangers that pro football players face is getting yet another round of scrutiny.

Kuechly, just 28, sent shockwaves through the football community with the announcement Jan. 14. He did not give a specific reason, but said he was not able to play the game the way he wanted. From 2015 to 2017, he had three concussions and missed 10 games because of those injuries.

Other sudden departures from football include Indianapolis Colts quarterback Andrew Luck last year at age 29 after a series of serious injuries and New England tight end Rob Gronkowski who retired last year at 30.

Millions of Americans tune into football games for the big plays and bone-crushing hits, but the game can carry a heavy price tag for players: concussions. In everyday language, that’s a traumatic brain injury.

“A concussion, in general, refers to some sort of trauma to the brain that results in changes within the brain,” said Dr. Eric Warren, a board-certified sports medicine specialist at Novant Health Waxhaw Family & Sports Medicine.

“It doesn’t have to necessarily be a direct hit to the head, but if a person gets hit hard enough elsewhere on the body, you can still get a concussion from the force” that causes the brain to bang rapidly back and forth or hit the side of the skull, Warren said.

While usually temporary, the two most common signs of concussions are headaches and dizziness. Others include problems with concentration, memory, balance and coordination.

But there is growing concern that repeated concussions and head trauma can have devastating long-term damage: chronic traumatic encephalopathy (CTE).

Link between CTE and sports

CTE was first discovered in 2002 after former Pittsburgh Steelers Hall of Famer Mike Webster died and an autopsy revealed repeated blows to the head caused permanent brain damage. Experts linked that to the erratic behavior his family reported.

“The data shows repetitive head injuries or multiple concussion episodes, especially if not fully healed, is linked to CTE,” Warren said. “Single, isolated and treated concussions did not seem to be associated with an increased risk of developing CTE.”

It can only be diagnosed in an autopsy through brain tissue analysis.

The conversation surrounding CTE and football has increased dramatically in recent years in the wake of notable players who died and were later diagnosed with CTE: tight end Aaron Hernandez, linebacker Junior Seau, safety Andre Waters and halfback Frank Gifford.

That’s just four of the 111 confirmed cases of CTE in former NFL players.

After analyzing the brains of 266 former amateur and professional football players, the research found football players increased their risk of developing CTE the longer they played.

The research on CTE has forced some former players to rethink their time in the NFL and retire early. For example, linebacker Chris Borland retired from the San Francisco 49ers after one year citing concerns about the potential long-term effects of head trauma.

CTE doesn’t just affect football players either. It can happen in athletes from other high-risk sports like cheerleading, hockey, boxing, lacrosse, soccer and rugby. But surprisingly, it’s also found in non-athletes.

That same concern is echoed by parents asking if sports are safe for their kids. But Warren encourages parents to sign their kids up for sports because the benefits outweigh the minimal risk.

“Even if a parent is concerned about signing up their child for a high-risk sport like football or soccer, there are other sports they should look into,” Warren said. “It’s important because it helps their child remain active, but it also benefits them mentally and socially.”

Warren emphasizes what’s most important is that parents and athletes concerned about CTE look at the bigger picture.

“There are literally millions of athletes who have had concussions and went on to become productive members of society,” Warren said. “Not every person who has had a concussion will go on to develop CTE. It’s a very small percentage actually.”

He also said that sports are now safer than they have ever been.

In North Carolina, there is required yearly education for coaches, first responders and volunteers. Parents must sign documents stating they understand the basics of concussions.

In addition, athletes go through baseline neurocognitive concussion testing in the preseason, Warren explains. If student athletes do get a concussion, they have to sit out for a minimum of six days.

Warren also has personal ties to football — he played as an offensive lineman in high school before an injury sidelined him. He said that safety today in sports looks a lot different from a few decades ago when players were urged to “shake it off” after a big hit left them disoriented.

“I remember when I had a concussion early on in a football game, I stayed in and played the whole game,” Warren said. “That would never happen these days.”

The key to staying safe is that it needs to be a partnership between the athlete, coaches and medical staff, said Warren. “Everyone has to be on the same page when it comes to safety so that the athlete can be healthy and succeed long term.”