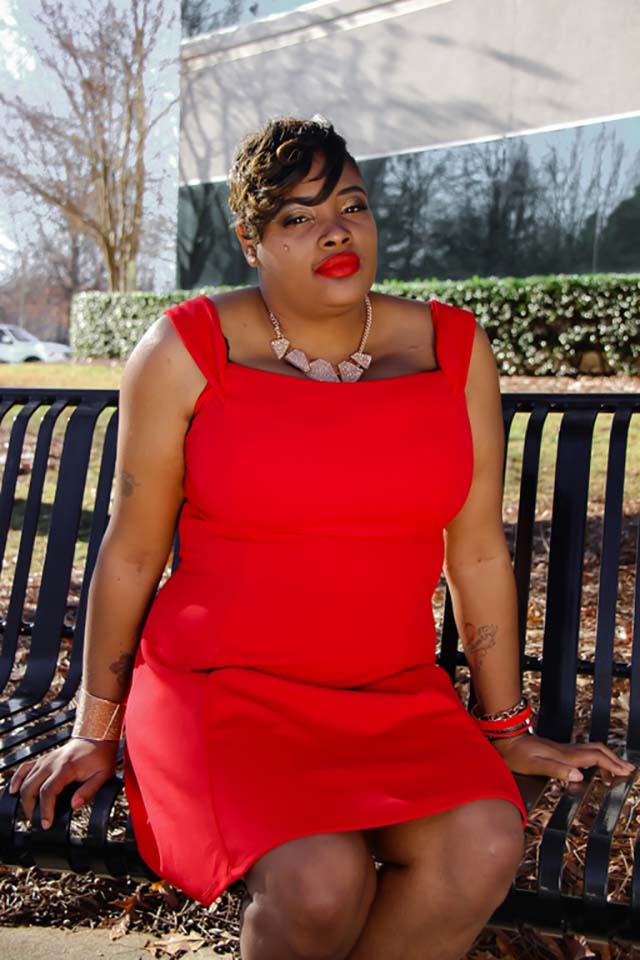 A mother of 3 gets devastating news…and keeps going

Since 2013, Novant Health and the American Heart Association have been highlighting local women survivors in our community and supporting women’s health, wherever they may be in their journey. Cherron Gilmore, a previous Forsyth Go Red Woman, was a young mother expecting her third child when she was diagnosed with peripartum cardiomyopathy.

This is my story, my journey, my battle. Bottom line: heart disease picked the wrong chick!

Ten years ago like most women expecting a child, I was elated. After already birthing 2 healthy boys, finding out I was having a girl was the icing on the cake.

Entering into my seventh month, I became more miserable than normal. Just walking to the bathroom seemed like I had run a marathon. Sleeping was impossible. I could not lay flat without feeling like someone had parked a truck on my chest. Something was indeed wrong and I knew it.

On March 12, 2010, at 28 weeks, I was diagnosed with peripartum cardiomyopathy (PPCM), which the doctors informed was a rare form of pregnancy-induced heart failure. My heart had weakened and become enlarged and was not pumping as well as it should have.

The doctors decided it was best to induce and deliver my daughter early. On March 14, 2010 my baby girl was born two months premature and weighed 3 pounds. Generally with PPCM,  your heart is supposed to go back to its normal state with proper care. That was not the case for me.

I was informed I needed an implantable cardioverter defibrillator, also known as an ICD. After 6 months of fighting this disease, I learned that I was in danger of going into cardiac arrest at any time. So in August of 2010 I underwent my first heart related surgery. It wouldn’t be my last.

As months passed, my condition worsened. Some days I barely had enough energy to get out of the bed. Some nights I’d wake up gasping for air. I kept telling doctors my health was deteriorating, only to be told everything was fine.  I finally decided to get a second opinion.

A week later, I was hospitalized and told that, indeed, my condition was very bad and that I would eventually need a heart transplant. But the first step was to receive a device called an LVAD, or Left Ventricular Assist Device. It’s a pump that helps keep your heart working and often serves as a bridge to a transplant.

It saved my life.

Life with an LVAD and its alarms and limitations was difficult, but we fought this battle the best we could together. My children, who then were 10, 5 and 2, were taught all about “Mommy’s Heart Pump.” After surgery, you need someone to stay with you until you’re medically cleared to be home alone. My husband was my only someone. Even though he was able to take leave that protected his job, he did not get paid. We lost everything. Our home. Our car. We ended up living in a hotel with our children for over a month.

Eventually, I began to work out, change my eating habits and adjust to life as an LVAD Warrior. It was a very trying time emotionally for all of us. People in stores and restaurants stared at me and asked awkward questions about the gear that came with me. Life with an LVAD definitely changed me, and my perspective.

During that time, I also did a transplant evaluation. I had to come to terms with the fact that for me to live, someone else would have to die.

A little over a year after getting the LVAD, I had a routine doctor’s appointment, where my doctor looked stunned after reviewing my results. What NOW, I thought. “Your heart looks very happy,” she said. I could hardly believe it. I actually laughed.  She explained that the LVAD had given my heart the break that it needed. And it was functioning on its own. I had the LVAD removed.

And here I am. And after all that I’ve been through, I am thankful and grateful to be a part of something so positive and monumental. Heart disease has taught me many things. But the one thing that stands out is…gratitude.  I am so grateful to have a second chance at a normal life. I live every day to the fullest.