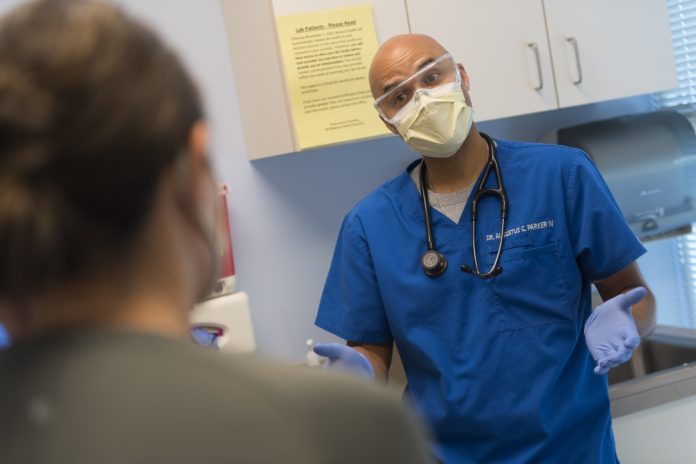 CHARLOTTE – After more than two years of battling a devastating pandemic, it’s natural to become a little jittery when we hear the word “outbreak” around a virus most of us had never heard of before. That’s where we are with monkeypox at the moment.

The most important thing to know is this: There is no evidence that monkeypox spreads as easily as COVID-19, according to the World Health Organization. That said, there is cause for concern. On Aug. 4, the U.S. declared it a national health emergency. The WHO declared monkeypox a global emergency last month.

Just like COVID, developments will evolve as we learn more about the spread and the availability of vaccines. The following guide answers basic questions about the virus. Check back with Healthy Headlines for updates and news.

Monkeypox is caused by the monkeypox virus, which belongs to the same family of viruses as smallpox. The symptoms are similar to smallpox but generally milder for monkeypox.

Monkeypox is usually found in several central and west African countries and is transmitted from animals to humans. Some of the cases discovered in May, the start of the outbreak, are linked to that region of the world. The virus has since spread around the globe and across the United States. As of July 25, the Centers for Disease Control and Prevention reported more than 30 cases in North Carolina and about a dozen in South Carolina.

The monkeypox rash can start in a place where a person was exposed to the virus. In recent cases, which included the groin, sexual organs, and the anus. It then can spread across the body, particularly the face and extremities. The rash is made up of bumps that look like pimples, called pustules. These pustules are filled with fluid and are deep-seated, firm and well-defined.

It can take five to 21 days for symptoms to start after exposure. A person is infectious from the time symptoms start until the rash lesions have crusted over.

At the moment, the majority of patients have been men who have sex with men. But “anyone can contract monkeypox through close contact,” said Dr. Andy Seale, an advisor with the WHO’s HIV, hepatitis and STI program.

Monkeypox is relevant to anyone, public health experts agree. At least two cases have been documented in U.S. children.

How is monkeypox treated?

Most people infected with the monkeypox virus will recover on their own, according to the CDC.

Others, including people who are immunocompromised or have severe illness, children and pregnant women, may qualify for a treatment that is not currently approved by the FDA but is available to certain people under a CDC protocol.

The best way to prevent the spread of monkeypox, according to the CDC, is to avoid close, skin-to-skin contact with anyone showing symptoms. Don’t share utensils or cups with someone who has monkeypox and avoid touching their clothing and linens.

The CDC recommends a monkeypox vaccine for anyone who might be in close contact with infected people, including medical professionals. People who have had a known exposure to monkeypox should contact their health department.

The monkeypox virus was discovered in 1958. Concern that it could become a global problem dates back to at least 1988, said Dr. David Priest, Novant Health chief safety, quality and epidemiology officer.

That concern stemmed from the eradication of smallpox. The end of immunization programs in 1972 led to waning immunity worldwide from other viruses in the smallpox family, including the monkeypox virus.

And Priest noted, it’s not the first time we’ve seen monkeypox in the U.S. In 2003, there were 79 cases in the Midwest related to exotic pets and prairie dogs.