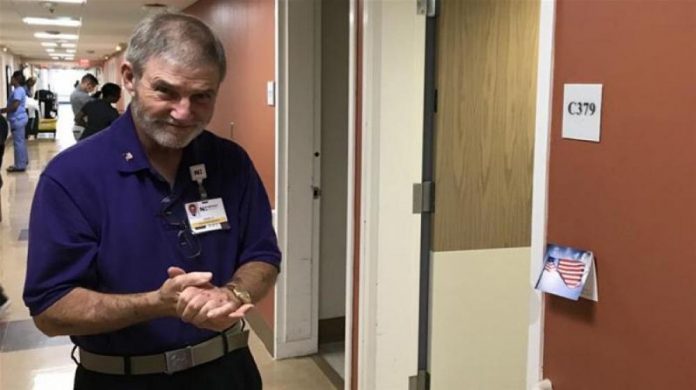 Terry Godwin has a knack for making certain hospital patients feel better. He gently raps at their door, quietly enters their room, and then he says, thank you.

“Thank you for your service.”

Moments like this now unfold daily across the Novant Health system as a platoon of volunteers roll out a new program to recognize veterans who are being treated.  And that’s a considerable number of patients. On any given day, 1 out of 10 hospital patients at Novant Health are military veterans.

“We wanted to let veterans know that we’re grateful for their service to our country,” said Kathy Brown, who manages Novant Health volunteer services in the greater Charlotte market. “This helps us become more patient-focused and have authentic conversations with them.”

Brown, who grew up in a military family, said they chose volunteers who are veterans because hospital team members realize that they quickly connected with patients who were also veterans. “They really have a more engaging conversation. It really makes a difference.”

In fact, Novant Health needs more veterans across the system to become part of this special volunteer team. If you’re interested or know someone who might be, click here for volunteer services and then click on the hospital nearest you along the right side of the page.

“They perk up immediately when I say I’m here because they’re a veteran and their family perks up too,” said Godwin, 68, who volunteers several hours a week at Novant Health Presbyterian Medical Center in Charlotte.    “We just go from there and I let them talk,” he said.  “I just love being around vets. They’ve been in World War II or Korea. They’ll tell you a story or two. I’ll tell you, it means a lot to them.”

Godwin, a retired wholesale hardware sales manager, served two years with the Army in Germany after being drafted in 1970 during the Vietnam War. He was already a volunteer at Presbyterian Medical Center before joining fellow volunteers Nick Melton and Larry Parkinson to launch the program in Charlotte.

After visiting each patient, the volunteers hang a thank-you card bearing the American flag outside their door. An unplanned side benefit: care providers quickly learned what the cards symbolized and started signing the cards themselves. It also helped lead to deeper connections between team members and patients, which is good for everybody, Brown said.

On a recent day, Godwin talked to several veterans, including a former Army first sergeant who was more than happy to start swapping stories about their time in the service. A few doors down, a Marine was watching TV in a darkened room when Godwin introduced himself as an Army man, joking that it stood for Ain’t Ready for Marines Yet.   They shared a quick laugh, and as Godwin turned leave, the Marine told him:  “Thank you for your service.”