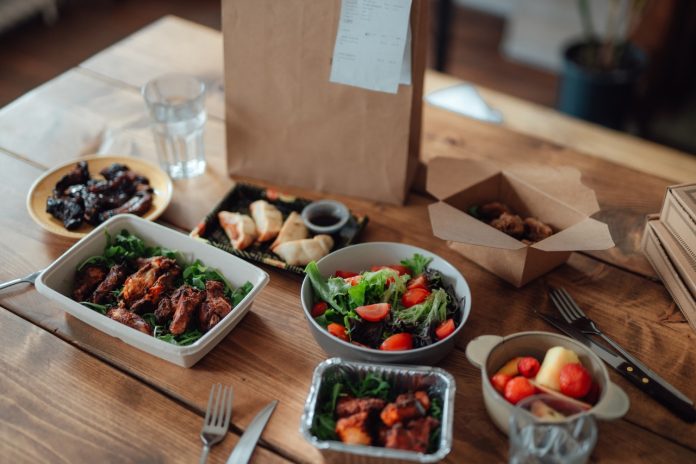 CHARLOTTE – Whether you’re too busy to cook or simply planning an at home date-and-a-movie night, odds are that Asian takeout food is one of your go-to options. It’s quick, easy, affordable and craveable — what’s not to love?

The answer: High levels of saturated fat, sugar and sodium which, when consumed on a regular basis, can contribute to life-threatening conditions like stroke, Type-2 diabetes and cardiovascular disease, according to Alyssa Marrero, a dietitian at CoreLife Novant Health – Ardmore, in Winston-Salem.

“Because these foods taste so good, it can be hard to stop when we’re full,” she said. “So, we may end up eating more than we intended.”

What Marrero does not encourage is completely eliminating favorite foods. Instead, she offers strategies like those below, to helps her patients enjoy dining out — or ordering in — from start to finish.

Everyone loves egg rolls and, filled with vegetables and meat, they do offer some nutrients. But they’re also high in sodium and fat, according to Marrero.

For example, one national takeout chain’s chicken egg rolls contain about 200 calories apiece — not terrible. However, more than 50% of those calories come from fat. The egg rolls also contain 390 milligrams of sodium, more than 20% of the 2300 milligrams per day recommended by the U.S. Centers for Disease Control and Prevention.

“Too much sodium can increase your risk for high blood pressure, so I’d recommend avoiding them if you’re trying to eat a heart-healthy diet,” she said. “But if you really love them, you could get an order to share to keep your portion size in check.”

Steamed — not fried — dumplings are a healthier egg roll alternative, especially if they’re filled with vegetables instead of meat. Or, start your meal with won ton, egg drop or hot-and-sour soup.

“Broth-based soups like these are much lower in calories and fat than most appetizers,” Marerro said. “An added bonus is that the liquid helps fill you up, so you’ll eat less when the heavier entrées arrive.”

On to the entrées

Traditional Asian food was based mostly on healthy ingredients like vegetables, rice and small portions of meat or seafood. But, when you open the menu at a modern, American Chinese restaurant, you’re sure to find fat-and-sodium-laden entrées like crab Rangoon, General Tso’s chicken. Sweet-and-sour pork, another favorite, can contain more than 20 teaspoons of sugar per order.

“Treating yourself to a favorite now and then is fine, but if you order takeout frequently, it’s helpful to know about more nutritious options,” Marrero said. “Looking for foods that aren’t breaded is a good start. And you can usually find lots of vegetables, like broccoli, carrots and sugar snap peas at Chinese takeout places, too.”

For fans of General Tso’s chicken — breaded, deep-fried and doused with a sweet sauce — kung pao chicken may be a good alternative. Made with stir-fried vegetables and peanuts, it contains less fat and sugar, while delivering healthy fiber, protein and antioxidants

Other dishes on the healthier side include:

“If you’re adventurous or prefer a plant-based diet, you could order a tofu dish — or ask the restaurant to use it in place of meat in your entrée,” Marrero said. “Tofu is made from soybeans. It’s gluten-free, cholesterol free and is a great way to get lots of protein.”

“The most important thing is to enjoy your meal, and be keep an eye on portion sizes. If you feel like you just ate Thanksgiving dinner at the end of the meal, you probably had too much,” she said. “But, if you eat more slowly and mindfully, you’re much less likely to overdo it.”