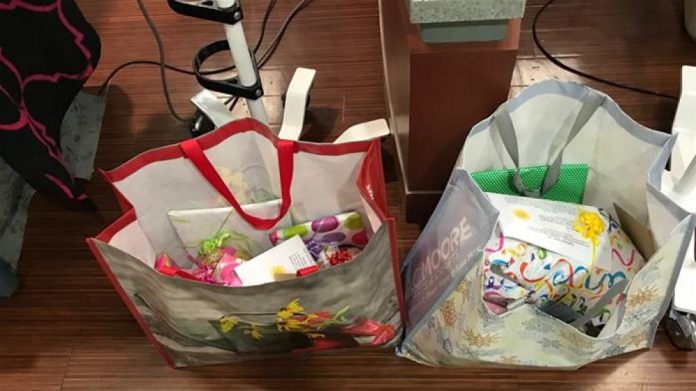 When cancer patient Kathy Hybarger showed up for her first chemo treatment at Novant Health Presbyterian Medical Center this spring, it was the last place she wanted to be.

For starters, the 65-year-old Charlotte woman was still coming to terms with her diagnosis of bladder cancer. She was also anxious about the potential side effects of the medication. And when she walked in the door of the infusion center, the open seating arrangements where the drugs are administered via IV was not exactly what she’d been expecting.

Then, a man toting a shopping bag ambled up from nowhere. He had a pile of wrapped gifts for her, he explained, and she should open one a day for the next two weeks.

Hybarger was slack-jawed. “I stood up and asked if I could give him a hug. I looked over at my daughter and she was sobbing. It totally changed our moods for the whole day. And I haven’t been in a bad mood about the chemo since then.”

Chalk another one up for cancer survivor Sharon Grammer and Fighting Cancer Inc., a nonprofit she founded to support cancer patients with the Sunshine Box Project. Since 2009, Grammer and a small group of volunteers have been stepping up to provide gift bags to first-time chemo patients at Presbyterian Medical Center to help ease them into the next chapter of their cancer-fighting journey. Items range from a comforter to stay warm during treatments to a mug with special coffee or tea.

“A lot of people get emotional,” said nurse Lisa Rioux, who oversees the infusion center.  “It’s like getting a hug they really need.” And, she notes, as supportive as the nurses and other medical team members are at the center, hearing from a cancer survivor offers an extra layer of support.

Box on the porch

Grammer’s story starts in December 2008, when she was diagnosed with stage 4 ovarian cancer. “I knew I was sick. They told my daughter I had six weeks to three months to live. At the time, I didn’t want to know.”

After rounds of chemotherapy and surgery, Grammer said she returned home from the hospital in March 2009 to find a large box waiting on the front porch. It was from the family of her ex-husband, and they wanted her to know they were thinking of her.

Inside the box, she found a nest of wrapped gifts. The instructions: open one present a day. “I had so much fun with that,” said Grammer, now 59.

As she slowly pulled her life back together, she could not stop thinking about that box of presents.

Fast-forward to August 2009. She was working as a legal secretary when she decided it was time to pay it forward. She assembled and delivered her first three-gift packages to patients at Presbyterian.

·         Since then, backed by a small, devoted group of volunteers, Grammer’s project has given away more than 1,700 gift bags, each containing  14 gifts — two weeks of presents.

·         They’re in touch with the infusion center daily so they know how many gift bags to deliver. Grammer’s group receives only the patient’s gender and first name to protect privacy.

·         The drivers are Alvin Shiffler, Neil McQuire and her dad Richard Grammer. Friends Jim and Darlis Hartman coordinate a lot of the gift buying, wrapping and other layers of details it takes to keep a daily operation spinning along. Members of the Bible Baptist Church in Matthews also lend a hand. The Novant Health nurses at the center have also played an important role.

·         While the vast majority of bags have gone to Presbyterian, some have been shipped as far away as Venezuela, England and Canada, not to mention more than 20-something states in the U.S.

·         The bags themselves contain a mix of comforting and useful gifts that add up to about $45 retail. Besides the comforter, items typically include cozy socks, pillowcase, a journal, inspirational book and a variety of small items that can come in handy during chemo.

“I get the best ‘thank you’ notes, Grammer said. And in other cases, stories speak for themselves.

One that stands out: A woman who’d just moved from Texas and hardly knew anyone in Charlotte took the gifts home and put them under her forlorn Christmas tree. She had been planning to spend the day by driving to the Outer Banks just to get away from the holiday. Instead, she stayed home and unwrapped the presents she could have never imagined receiving.

Another time, Grammer got a call from a woman whose husband had died that day. “I want to tell you that your gifts were really such a ray of sunshine,” the caller said, “at a really dark time.”

Before the gift moment, she said, “I felt like a statistic… I was angry, really. And after it was just like, OK, just let people be nice. It really changed the way I looked at things.”

As it turns out, the biggest gift in the bag was one that didn’t even need to be unwrapped.