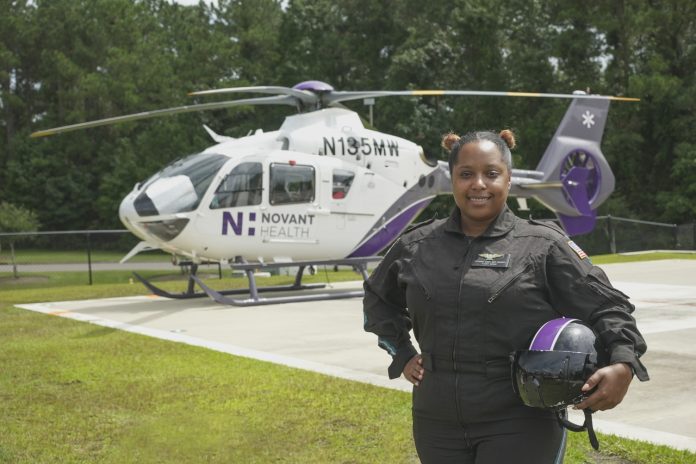 CHARLOTTE – When paramedics can’t reach an emergency scene by ambulance, flight paramedics swoop in. That’s why Bethany Hart was the one circling hunting fields and dirt roads with a helicopter pilot near Wilmington when the driver of an off-road vehicle got hurt.

They didn’t have coordinates, but they were able to locate the scene along rough terrain. The landing seemed dicey to Hart. “But my pilot was like, ‘Yeah, I can land there.’ So I said, ’If you’re cool, I guess I am.’”

The pilot stuck the landing. Hart, a flight and critical care ground transport paramedic for the AirLink/VitaLink department of Novant Health New Hanover Regional Medical Center, got to work stabilizing the patient and loading him into the helicopter. It was a challenge, having to pull the patient on a stretcher over land that wasn’t smooth while reassuring the kid, who thought he was going to die. She told him: “We’re getting you to the right place, you’re doing great right now.”

Hart, 30, has been a flight paramedic since 2018. “It’s essentially ground critical care, but with ambulances in the air,” she said.

She shows up for accident scene calls for the local fire department, for medical emergencies out in the field – or in literal fields – and for patient transports between hospitals. “At my core, I love our scene calls,” she said. “EMS is that first interaction with medical care. We come in as the second responders who can identify what’s going on. It all really puts me in my element.”

“The things that stress me out are the normal things that stress other people out. Like having to go and get my oil changed,” Hart said. “But responding to a call isn’t stressful to me. I feel compassion, but I mentally know the line between an emergency and a job. Every call I go on is not my emergency, it’s my job.”

This wasn’t the job Hart dreamed of as a kid. “I always knew I wanted to be in the medical field,” she said. “I thought I was going to be Dr. Hart, the pediatric cardiologist. But I couldn’t be in a building all day long.”

As a teen, she worked with a friend at a Charlotte YMCA who opened her eyes to emergency medical services. “Providing medical care outside of four walls sounded like a good option for me, so I went to paramedic school,” Hart said.

She finished school in Fayetteville at 21 before taking a job in the Wilmington area. She followed the required path from general paramedic education, to 911 service, to ground critical care before she could take a flight test and join the flight paramedic team.

“I don’t think I was made for a different position – I’ve always been all or nothing,” said Hart, who was unfazed by the fact that she had never been on a helicopter until she joined the team. “I’m really good at going from hanging out in my pajamas at the station to being dressed up and ready to go.”

It’s not for everyone, even if they’re interested in medicine.

“Our line of work is very intense due to the high acuity of patients and the environment we’re serving those patients out of,” said Kevin Hodge, chief flight nurse and program manager at Novant Health New Hanover Regional Medical Center. “But Bethany is very passionate. She doesn’t just do this as a job, it’s more of a calling to her. She enjoys engaging people – not just the patients, but the community at large.”

That’s why it’s not unusual for Hart to show up in her flight suit for a talk at schools, often with the chopper in tow. “In this job, we’re usually interacting with people on the worst day of their lives,” she said. “So I like being able to go out in the community where people don’t see me as a negative. I enjoy telling them what I do and being able to have those fun conversations and hear kids talk about what they want to do when they grow up. I’ve also been able to talk to inner-city kids who’ve never seen someone who looks like them in a flight suit.”

In the U.S. the ranks of flight paramedics is comprised of mostly white males. Hart believes her school appearances are a key way to help diversify the pool of flight paramedic applicants. It starts with high school students learning it’s a career option for them, and then understanding their education options, like pursuing two-year degree programs instead of four years of college. Even then, they still need to gain years of experience before being eligible for a flight paramedic program.

“We need to get into schools and educate people about this, because it will take 10 to 20 years to see change by the time they get through training,” Hart said.

In the meantime, she keeps showing up for her patients, whether they need to be lifted from an accident scene or flown from another hospital into Wilmington. “We’re not there to heal them, but we can make them more comfortable and interact with them in a way that makes them feel more cared for and safe,” she said. “We can get them to where they need to go.”