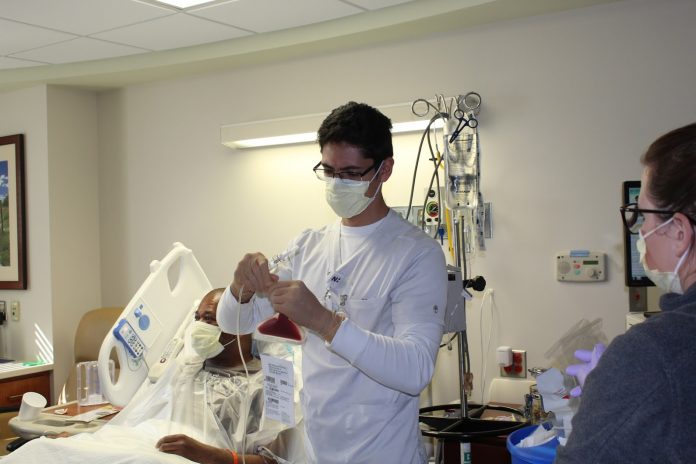 CHARLOTTE – Some people might welcome the day their alarm doesn’t ring at 3 a.m., but Todd Covington isn’t one of them. “Believe it or not, I miss the days of getting up early and loading into my truck,” the former trucker said.

The Monroe, North Carolina, resident has been unable to work since his cancer diagnosis in late 2016. Nagging back pain initially prompted the now 56-year-old Covington to visit the doctor. Through testing, doctors discovered he has multiple myeloma. More than 30,000 Americans are diagnosed with that form of blood cancer annually.

Men are more likely than women to develop the disease, and it’s twice as common among Black people than white people, according to the Centers for Disease Control and Prevention.

While there’s no cure for multiple myeloma, treatments can slow its spread and sometimes make symptoms – which include bone pain and fatigue – go away. That’s been Covington’s goal and what inspired him to receive cellular therapy at Novant Health Cancer Institute. Cellular therapy uses a patient’s own cells to enhance their fight against cancer and recovery from chemotherapy.

High-dose chemotherapy is a treatment option for blood cancers such as lymphoma or multiple myeloma. But to safely administer high doses of chemotherapy, it must be followed by an infusion of previously collected stem cells, explained Dr. Omotayo Olusola Fasan, physician executive of Novant Health’s malignant hematology, transplantation, and cellular therapy program.

“We give such a high dose of chemotherapy that it wipes and destroys your bone marrow cells. So, if we just give that chemotherapy, a lot of patients would experience more severe side effects, which could even be fatal,” Fasan said.

A person’s stem cells are collected from the blood, utilizing a special blood cell separating machine. This procedure is referred to as apheresis. The cells are then frozen, or cryopreserved, and then thawed and infused back into their bloodstream after chemotherapy. This allows a person’s bone marrow to produce new blood cells and boosts their immune response.

The procedure is commonly called an autologous transplant but is more accurately referred to as high dose chemotherapy with autologous stem cell rescue, Fasan said.

‘When one line of therapy fails, there’s another’

Undergoing the procedure in early 2019, Covington was one of the first patients to receive the transplant at Novant Health. His cancer went into remission, but the disease progressed about two years later.

“What is challenging for multiple myeloma patients is that there’s no cure. But the great thing, if there’s a great thing about cancer, is that when one line of therapy fails, there’s another. There are so many therapies. So, with this being his second transplant, that’s another line of therapy for him,” Lantos said.

Thankfully, Covington’s second transplant did not require another round of stem cell collection.

“With myeloma patients, when we collect their stem cells, we collect with at least two transplants in mind. So, there’s always something in the bank in case of disease progression,” Lantos said.

An autologous transplant requires a two- to a three-week hospital stay as the patient is monitored. Potential side effects include mouth sores, nausea, diarrhea, fatigue, and low blood count.

‘Just don’t give up’

Covington remains hopeful despite any challenges that may come his way. “God is out there working for us. Just don’t give up,” he said.

Covington, who describes himself as a strong-hearted person, credits his positive attitude to family and his Baptist faith. He has a love of the outdoors and enjoys fishing, gardening, watching Westerns (especially Clint Eastwood movies), and riding motorcycles. “I can’t wait to get back on my Fat Boy,” Covington said, referring to his beloved Harley.

“All through therapy, he’s been a very cheerful person. Sometimes we’ve tailored our therapy around his calendar to make sure he gets to do what he wants,” Fasan said. “Because what’s the point of spending all your time in cancer treatment if you’re not going to live a life? So, he’s done a great job of balancing the two.”

‘This is a game changer’

Novant Health offers another type of autologous cellular therapy known as chimeric antigen receptor (CAR) T-cell therapy, which can improve the body’s ability to locate and attack foreign cancer cells. It is considered if a patient isn’t responding to chemotherapy or if the disease reoccurs.

“Being able to offer this is a game-changer. It’s very exciting,” said Dr. Alan Skarbnik, director of the lymphoma and chronic lymphocytic leukemia program and director of the experimental therapeutics, malignant hematology at Novant Health Cancer Institute.

There are indications that autologous transplant can also benefit people with multiple sclerosis (MS), an autoimmune disease that affects the central nervous system. For patients with relapsing or remitting MS, an autologous stem cell transplant could stop them from accumulating progressive neurological disfunction, Fasan said.

“We’re looking to offer autologous transplantation for some MS patients. We’re working with Novant Health neurologist Dr. Matthew “Max” Carraro to bring this online, possibly as soon as this fall, so we’re excited about that,” he said.

“It’s one of the best things about working in hematology,” Fasan said. “It’s always been on the forefront of cancer research and drug development.”