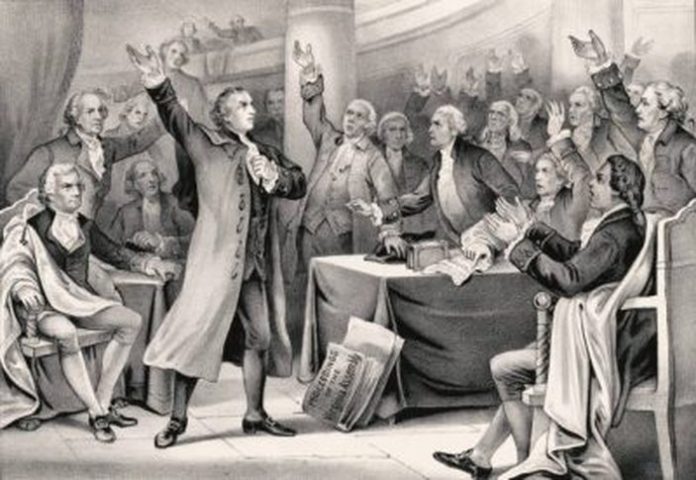 CHARLOTTE – “Give me liberty of give me death!”  Many may recognize these immortal words from March of 1775.  Even a brief review of Patrick Henry’s entire speech provides profound insight into the origin of Henry’s mettle and provide encouragement relevant for today.

“For my own part, I consider it as nothing less than a question of freedom or slavery.”  As a result, Henry feared that if he kept back his opinions, it would be “an act of disloyalty toward the Majesty of Heaven, which I revere above all earthly kings.”  He observed that over the past decade, America had endured the increasingly tyrannical actions of the Crown despite American’ petitions.  In fact, the King answered with “warlike preparations which cover our waters and darken our lands…to force us into submission…. They are sent over to bind and rivet upon us those chains which the British ministry have been so long forging.”  He urges… “we must fight! … An appeal to arms and to the God of hosts is all that is left us!”  He assures the Virginia delegates that, “we shall not fight our battles alone.  There is a just God who presides over the destinies of nations, and who will raise up friends to fight our battles for us.”

He concludes: “Gentlemen may cry, Peace, Peace—but there is no peace.  The war is actually begun!…Is life so dear, or peace so sweet, as to be purchased at the price of chains and slavery?  Forbid it Almighty God!  I know not what course others may take, but as for me, give me liberty or give me death!”  The delegates responded: “To arms!  To arms!”  The resolutions to fund, raise and arm a permanent militia passed and Virginia set foot on the path to fight for freedom.