Home Behind the Lines 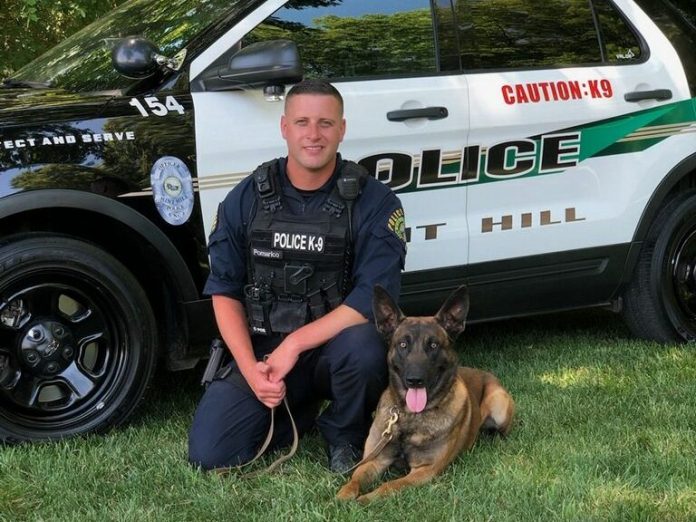 MINT HILL, NC – This week we introduce Officer Michael Pomarico, 2019 Mint Hill Police Department “Employee of the Year.”  Officer Pomarico describes himself as reserved and quiet, although others do not agree! He can generally be found cutting up in the department, in town with his K-9 partner “Valor,” strolling around the parks training with his dog, or conducting demonstrations.  Officer Pomarico has been employed with the department for nearly 6 years and assigned to the K9 program for 3 years.  Away from work, Mike can be found raising his 3-year-old son, fishing and riding ATVs.

Mike was inspired to enter law enforcement growing up in a law enforcement family in Wappingers Falls, New York, where his father has been with the New York State Department of Corrections for nearly 40 years.  Mike graduated from The College of Saint Rose in Albany with his degree in Criminal Justice Behavior, which propels him today as he conducts many drug investigations with his canine.  Driven by his passion to apprehend violent offenders and intercept narcotics, Officer Pomarico continuously succeeds at removing stolen firearms and illegal narcotics from the streets.  Mike can generally be found displaying his passion to help others and states “bringing positivity and professionalism during moments of crisis for others is his goal.”

We are fortunate to have Mike as most are not aware of his story.  Mike always wanted to be employed with the New York State Police, applying and testing multiple times.  Trying to get accepted in New York was a challenge as the application process was flooded with applicants, but little did he realize he would be accepted the day he was leaving his driveway in a moving truck for North Carolina.  Mike had been offered employment with Mint Hill, and he was not about to go back on his word and commitment to the Town.  Mike expresses no regret on his decision saying, “the comradery, family importance and community support proved I made the right choice.”

Behind The Lines: Fire Safety For Kids

Behind The Lines: Zaida Bristol

Behind the Lines: Officer Andrew Humm

Behind the Lines: Michael Maness

Behind The Lines: Mark Thomas